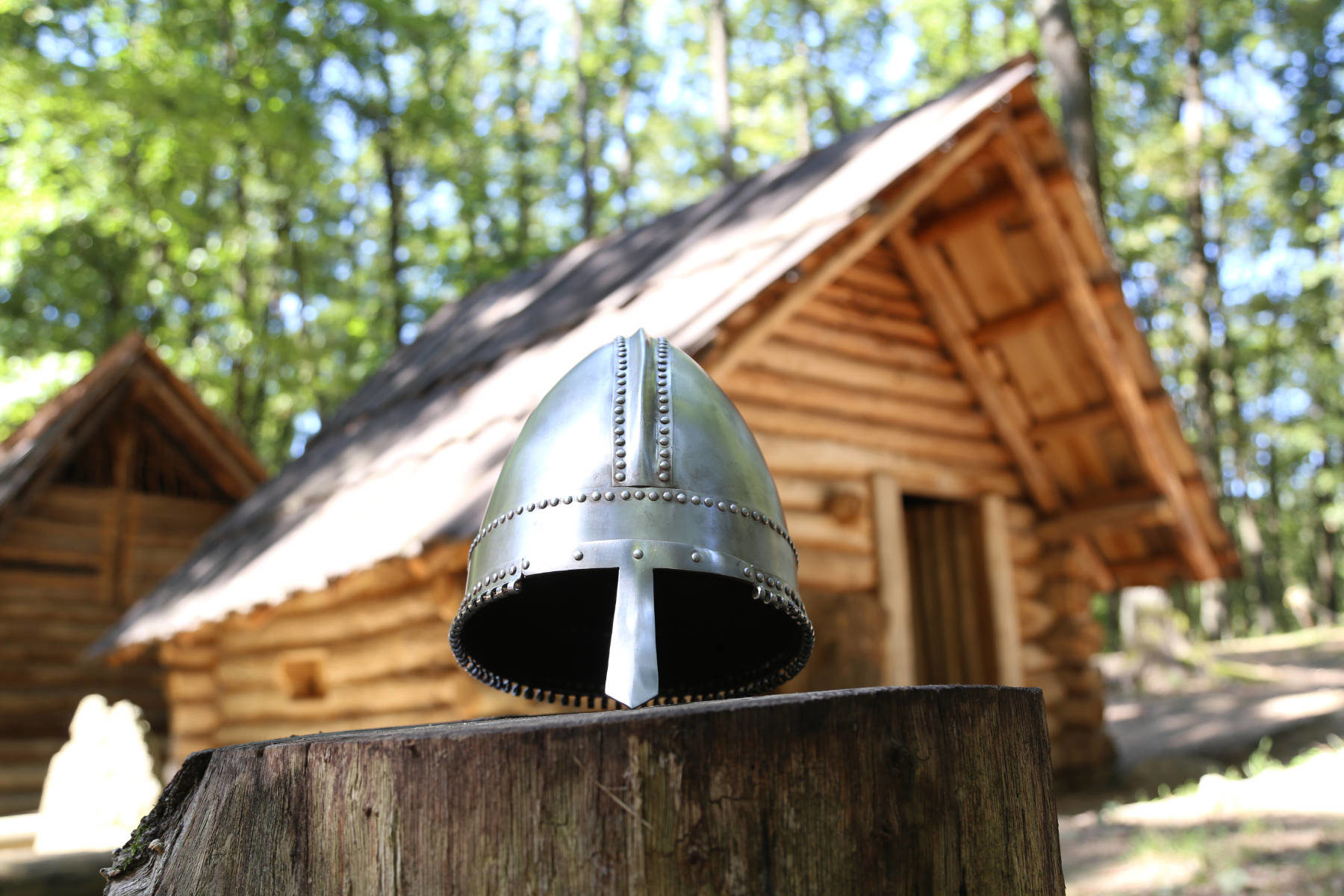 The first credible written mention of the existence of Bojná town dates back to 1424. During the 15th century Bojná experienced a great development, thanks to the proximity of important medieval long-distance road. Unfortunately, in 1530 the period of prosperity turned into a disaster during a devastating Turkish raid, after which more than half of the houses in the town were burned down. However, by the end of the 16th century, the town was prospering again, mainly thanks to its viticulture, crafts, markets and fairs. In the 17th century Bojná got its own coat of arms with a grape bunch and a wine knife.

The eastern foothills of a low mountain range – Považský Inovec, separating the middle basins of the rivers Váh and Nitra – is a settlement area with an old historical tradition. This also applies to the cadastre of the village Bojná, in recent centuries a wine-growing town, whose prosperity was also based on revenues from markets and wine sales. However, it is likely that an important trade route through the middle part of Považie and Ponitrie passed through Bojná in the ancient times. This is also indicated by the name of the village, which may have its origin in the Old Slavic word “bojňa”, indicating a settlement near the territory with a military garrison.

In the area of the village Bojná today are known several archaeological sites that are related to the beginning of our national history. The oldest Slavic settlement of this area from the end of the 7th and the beginning of the 8th century was discovered on the site Bojná III, located on the ridge of Žihľavník hill. These first settlers probably settled here because of the abundant iron stone deposits in the area. Two tumulary embankments were later built in the older settlement. In one of them the grave of a young, socially high-ranking woman from the 9th century was found. At that time, an intensive settlement was developed in the nearby area, bound by a complex system of fortifications built in several places of this area (Bojná I – IV).

The most important location is Valy Hillfort (Bojná II), which is located in the wooded northwest part of the village. Its massive fortifications, in some places reaching up to 8 meters today, confining a 12-hectare area. The results of research carried out here since 2007 by the Institute of Archeology of the Slovak Academy of Sciences in Nitra confirmed that it is a fortification, guarding the trade route from the area of Ponitrie to the area of Považie and also an important seat of the Prince with the purpose of christianization, production and business. So far, archaeologists have uncovered several foundations of dwellings, as well as production workshops of its former inhabitants. The fortified settlement was inhabited during the 9th and 10th centuries, with a vivid life in duration of about 100-120 years. Part of the monuments from the Valy hillfort belongs to the time of expansion of Pribina’s Principality of Nitra from the first third of the 9th century, which dominated the west of Slovakia following the dissolution of the Avar Kaganate. The greatest boom was reached by the Bojná agglomeration at the end of the 9th century, confirmed by the dendrohronological data obtained from the charred woods of the fortification. The prince’s courts in nearby Nitrianska Blatnica and in Ducovo on the western side of Považský Inovec became parts of the power structures of this area. According to the present findings, the Forthill Valy and probably most other localities disappeared at the beginning of the 10th century in connection with the occupation of the country by the Hungarian tribal union. Numerous monuments from this place prove the Christian faith of its inhabitants. In fact, we count on the presence of a missionary center, which in the 9th century spread a new faith further around. The gilded plaques with sacral motifs, which appeared to be part of a portable wooden altar, originated at the turn of the 8th and 9th centuries in the Western European cultural environment.

The short texts on them, written in Latin, are the first proof of the use of script by Central European Slavs and the existence of Christianity in Nitra area already before the Cyril-Methodian mission to Great Moravia. Although the remains of the sacral building have not yet been discovered in Bojná, the presence of the Christian liturgy throughout Central Europe proves a unique bronze bell with an iron heart and fragments of the other three bells. The monuments from the area of Valy also include the gilded ironwork of the book code and several ironworks with the motif of the cross.

Hundreds of archaeological artefacts have been found at Bojná fortified sites, which are one of the largest finds of its kind in the central Danube region. Gilded or gold and silver decorated belt ironworks, sword sheaths and numerous spurs demonstrate the presence of the social elite. Earrings and pendants point out that here also lived socially higher ranked women. The intensive forging production is indicated by the remnants of the workshops, as well as the finished products and the high number of iron „hrivna“ (coins) (more than 1000 pieces), which also served as a means of payment. Craft tools (hammers, anvils, files, chisels, axes, saws, drills), agricultural tools (plows, vomers, hoes, scythes, sickles), household items (door fittings, locks, keys, numerous ceramics, handles and bucket handles and rings, knives, iron boiler, nails) testify to the advanced crafts, agriculture and trade of the local Slovenian community.

Numerous weapons and equipment found (battle axes, arrowheads, remains of ring armor, spurs, stirrups, tines, shackles) along with fire-destroyed fortifications and houses depict the violent destruction of the overnmental centre in Bojná at the beginning of the 20th century.

Bojná village is located in the southern part of Považský Inovec and partly on the Nitra highlands, in the valley of the Bojnianka stream, at an altitude of about 211 meters. Part of Považský Inovec is also a dominant hill Marhat (758 meters high), located near our village; the mountain range separates the middle sections of the Váh and Nitra basins.

Through Bojná, which is part of the so-called „Mikroregión pod Marhátom“ (Microregion bellow the Marhat hill), there is a road from Topoľčany to Piešťany; it is more than likely that somewhere in these places there was once important ancient and later the medieval transition road from Central Považie to the Central Ponitrie.

In the northwestern part of the village there is a Hillfort Valy (Bojná I) covering an area of ​​11 hectares; it lies on the side ridge of Povazsky Inovec at a height of 390 – 430 meters, has a kidney shape and its mounds from the outside still reach an impressive height of 8 – 10 meters even today.

Above the gulch valley of the Bojnianka stream at the altitude of the Hillfort (335 meters) there is a complex circular fortification with a double line of ditches and rampart (Bojná II). Another earth fortification lies on the ridge of the eastern part of the Žihľavník hill (Bojná III); again, there are two defensive lines consisting of a ditch and rampart, originally probably circular.

The Archaeological Museum of Great Moravia was established by the village Bojná in 2012 as a museum exposition, registered by the Slovak National Museum. The project followed the permanent archaeological exhibition, which originated in 2007 in the village´s community house. Today modern museum, together with the regional information centre, is located in a separate part of the municipality building in the centre of the village.

„Ranč pod Babicou“ is located in Bojná. It is an ideal place for families with children and for all who want to get away from the everyday life´s stress. „Ranč pod Babicou“ offers a game preserve, where you can see more than 40 animal species from 6 continents of the world. Most of the animals they bred themselves, but some of them were imported from undignified conditions, from various places not only in Slovakia but also in Europe. There are two ponds in the forested area. In the smaller pond there are only trout, in the larger you can catch carp, pike and zander. You can bring your own fishing gear or rent it here for a fee. The trout you have caught can be prepared roast-smoked right in the restaurant, or using an indoor grill you can prepare fish yourself. The restaurant is really spacious. In addition to 40 seats inside it offers: a large lounge with a capacity of 60 seats, smoking room – glazed terrace with a capacity of 30 seats, outdoor terrace overlooking the pond and hunting lounge with a capacity of 24 seats. Apart from the restaurants and accommodation for guests, the ranch offers a range of other activities (horse riding for children, kids´playground, beach volleyball, bowling, agrotourism, cycling, relaxation pyramid).

Every year in the village Bojná traditional St. Cyril and Methodius celebrations take place. The famous history of Great Moravia comes to life on the Hillfort Valy.

The village has also bocome famous in Vatican, with a unique musical project Slovak Psalms from Bojná.

Rotunda of St. George is a national cultural monument, located on a small rocky promontory in the cadastre of the village Nitrianska Blatnica to the north of the village above the forest called Háje and under the slope of Kozí Chrbát of the southeast slopes of Marhát Hill. Nearby is a spring of drinking water.